Cole Gerovac is set to graduate in spring 2023 from the same program his father did six years ago, electrical and electronic automated systems. But it wasn’t his father who piqued his interest in Joliet Junior College’s academic program. It was a robot.

In October 2018, Cole was on the front page of The Times Weekly paper. A photo of him and JJC professor Mary Sue Gurka exploring a robotic arm took up most of the front page. 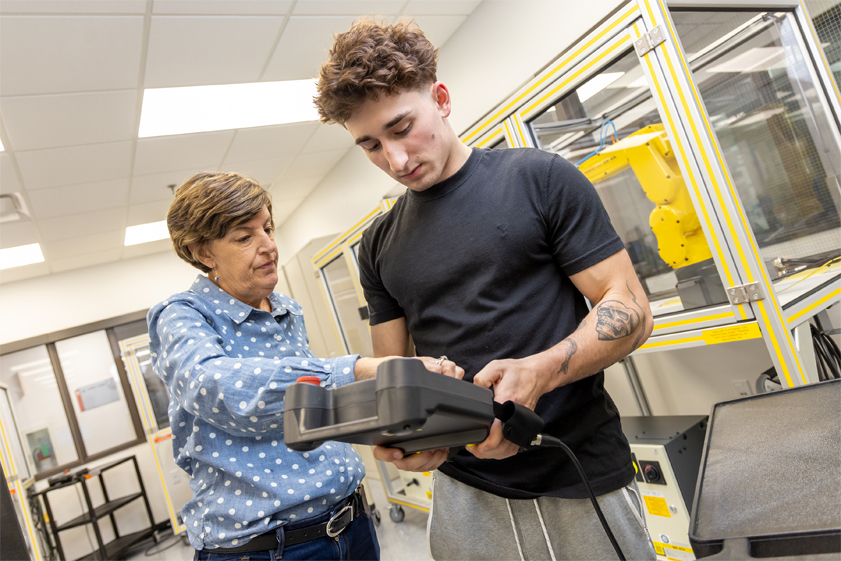 Fast forward four years, and now Gerovac is a student at JJC. He’s currently enrolled in Gurka’s EEAS class where he gets to learn about and operate that robotic arm and other automatic equipment, which has influenced his desire to work in automations.

“There was definitely a lot going on that day in 2018 with all the booths that had been set up, but the robot caught my eye maybe just for the simple fact it was a robot,” Gerovac said. “The idea itself of robotic controls seemed so ‘futuristic’ to me, and the way it was presented, almost like a game inside the enclosure, made me gravitate towards it more.”

Gerovac was attending Manufacturing Day as part of the STEM class he took through the Grundy Area Vocational Center while he was a junior at Minooka High School. Looking back on the visit, he said “it was a pivotal planning step for the future that didn't carry all of the stress or worrying, because it was just you getting to see how cool the field of work can be that you were looking to enter.”

“It didn't matter what booth you walked up to — the people there were friendly and encouraging, welcoming any questions,” he says of Manufacturing Day. “There were so many options for programs to get into.”

However, he wasn’t sold on the program after that day in 2018.

Even Cole’s father, who studied in the program seven years ago, would tell him about it, but at the time, it didn’t capture his attention.

While Cole's father has been a positive influence who helped him create a path for success, Cole’s interest in the program goes back to that robot on Manufacturing Day.

“When I started having questions and wanted to bridge that gap on what it was between the robot and controller that gave it the ability to move around, I knew there was more to the program than I had initially thought,” Gerovac said. "The little robot was just the tip of the iceberg.”

The robotic arm is just one of many hands-on displays at Manufacturing Day. JJC Director of Workforce Development Dain Mezza-Gotto said “these displays help show how much manufacturing has changed to be an industry that utilizes technology, innovation and creativity.” Cole’s enrollment at JJC is proof of that.

The robotic arm and EEAS program aren’t the only things that brought Cole to JJC, though.

“JJC offered me education close to home and with getting into the workforce early, they offered night classes that worked well with my schedule and allowed me to continue my education,” he said.

Cole’s formal education at JJC is coming to an end as he is set to graduate in spring 2023, yet his curiosity isn't going anywhere.

“The EEAS program itself kept me curious inside the field that I wanted to work in,” he said. “It was something new to me and the longer I was in it, the more I realized was out there."